Skin in the Game: The Steel Eyes Story Continues

Skin in the Game

"What could possibly compel a former stripper-turned-FBI consultant to return to her former life? Would a Russian hack of the US and the world's financial systems be enough to do the trick?

The second book in the Steel Eyes series, Skin in the Game forces former global rock star Steel Eyes out of retirement for a spy mission to save the world. There's just one little problem. Her new partner is the stripper with whom she'd had an intense connection years earlier.

Although she was only a minor character in Steel Eyes who we met ever so briefly on the page, it was clear when I wrote her that the stripper was going to come back someday. And she's back all right—in a big way. Raising the stakes in this tale is both her unresolved past with Steel Eyes, along with Steel Eyes's entry into the underworld as a stripper herself.

This story is all about skin in the game—both metaphorically and literally. From the risk these women take putting a stop to the Russian mob, to their near-naked precision on the dance pole.

When ground zero for the Russian hackers is strip club Chez Oui, how else could a spy and a former stripper infiltrate to save the world from the financial meltdown? By going deep into the world of Club Chez Oui—whose translation means, 'House of Yes.'" - Melissa Price, author of Skin in the Game 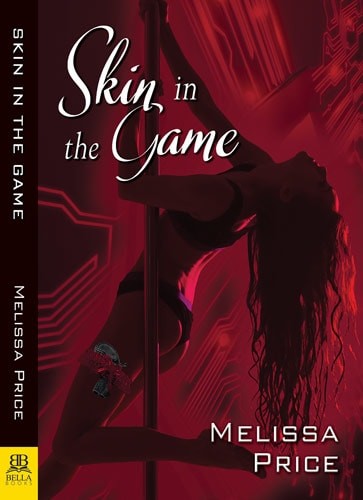 Title: Skin in the Game -

When you subscribe to the blog, we will send you an e-mail when there are new updates on the site so you wouldn't miss them.

HOW A SIMPLE WRITING EXERCISE TURNED INTO MY NEW R...
The Midquel: Is That Even a Thing?

Already Registered? Login Here
No comments made yet. Be the first to submit a comment