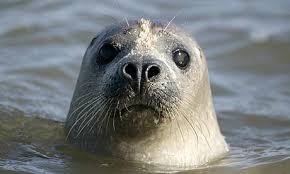 Have you ever had the occasion to keep noticing something? Perhaps it's an item or an animal that appears wherever you travel or whenever you visit a particular place.

This phenomenon surged into my life last week at the Southern California coast. While it wouldn't be entirely unusual to view a dolphin, a seal, a sea lion, or even a shark in those waters, would it make you think if you saw only one of those species – repeatedly? How about continually?

Whether I was walking, standing on the beach, or looking out from the pier, a seal came to greet me. Daytime or night, regardless of the spot where I found myself, seals appeared. Aptly named, Seal Beach was where I had my sendoff encounter with the largest of any I had seen.

Strolling along the pier on a clear cool evening, I leaned on the railing to look down at the water. A large seal was floating there, undoubtedly smart enough to wait for the line of fishermen to do his work for him. I wondered if the sudden presence of seals in my daily life was some sort of message or totem. So, I decided to have a conversation with this sea mammal. Perhaps he knew I something I didn't.

As I spoke to the seal, his head came out of the water to hear me. I've since learned that they don't have much in the way of external ears. Some people believe this facilitates the seal hearing his inner voice. By the time our brief conversation had ended, he was staring straight up at me, his eyes and whiskers reflecting the pier lights as our eyes met. But really, what does one say to a seal? Perhaps the message wasn't about saying anything, but rather about listening.

Throughout history, many cultures around the world have embraced the thought that certain animals represent spiritual beings or messengers. A totem can be a sacred object, an emblem or an animal that symbolizes something we need to be made aware of or to embrace.

When I returned home, I researched the meaning of the seal as a totem. The descriptions I found of the seal's significance fit my present awareness pretty well.

Each day, keep your eyes and ears open. Perhaps you have a totem, a gift, or an awareness that's just waiting to be confirmed by the Universe-at-large. As for me, a visit with the seals told me all I needed to know.